By Laurence Sandman (adapted and updated from a blog originally published on The Whole World Mobilizing, with permission) 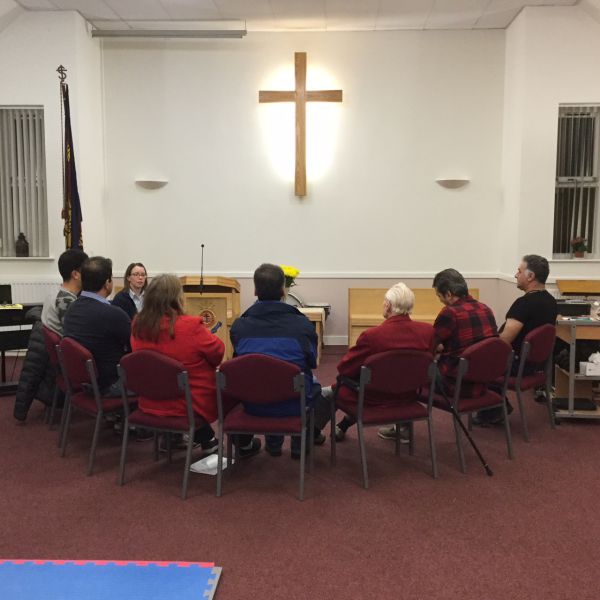 It’s a simple matter to type a departure point and a destination into Google and it tells me that it is 3616 miles or 5820 km and will take 61 hours by car. Easy.

As great and, I’m sure, as accurate as Google maps is, the figures don’t reflect the real world for real people. They certainly don’t even scratch the surface of the circumstances, the conditions and, above all, the emotional struggles of those who, as Christians and other faiths, find themselves in such desperate straits that a long, dangerous and uncertain journey seems the only way out.

The Salvation Army corps in this little corner of England known as Ellesmere Port was opened in 1913 and has witnessed many changes over the decades and welcomed a myriad of people across its threshold. It was in that same long tradition that a small group of men stepped across our doorway a few months ago and joined this little family and, although it may seem a little trite to say it, none of us will ever be the same again.

Behrooz, Hadi, Parviz, Shahram and Vahid and, more recently, Mahrzad and his daughters, have all made that journey from Iran, leaving family and friends behind. To our ears, strange names but that was where our own journey across the cultural divide began.

Writing the phrase ‘Welcome’ in Farsi (one of the languages of Iran) phonetically along with their names: “Sa-lome Hardy, Sha-hrom, Ver-heed, Bay-rooz and Par-vees” may not have been accurate but putting them up on the screen at our next worship service and helping our small congregation to greet our new friends out loud as a group at least helped bridge the gap between our languages and culture. Thankfully, a warm hug and smile of appreciation and welcome are the same everywhere in the universal language of God’s love.

It was a similar situation with our Bible readings. As a generation we are hugely blessed, in part at least, by the wonders of the internet and, every Sunday, it was a relatively simple matter to produce a sheet for each of our new friends with the full text of the readings in both English and Farsi, at least until bilingual Bibles could be sourced. That not only helped them to be able to understand what the message was all about, but it gave them the opportunity to study the translations afterwards and improve their own English.

But, for me, the most touching revelation was the way in which the two groups knitted so seamlessly together – each reaching out to the other over that cup of tea or coffee and a biscuit after the service, seeking to get to know each other better and understand the other’s situation. We may be separated by the complexities of two very different and ancient languages, but we share the love of one God, one Lord and Saviour and one heart.

We have all come a long way since then. Greetings and farewells are regularly exchanged in one another’s dialects and there is a warm and genuine concern from both sides of the language divide for the other. Believe me, you have not fully sounded the depths of Christian love until you have been in a prayer meeting when a fellow brother in Christ who, until a few months ago, was literally on the other side of the world, has prayed in his native tongue or in a somewhat shaky translation into English for his new family. Truly there is one Spirit, and there was a very clear echo back across the centuries to the Day of Pentecost when thousands heard strangers speaking in their own tongue.

Of course there have been moments of humour too. As good as online translation programmes are, they sometimes do get it wrong and the looks of puzzlement and, occasionally, amusement on the faces of our Iranian brothers is entertaining to say the least! We have generally tried to avoid making too many mistakes by getting the translation into Farsi and then putting that back into the translator to turn it back into English. If it survives that ‘double-handling’ successfully then we are fairly confident of the conversion and, where it has clearly gone awry somewhere along the route, we at least know about it in advance. I shall also remember with fondness trying to explain, over a traditional British meal with our Iranian brothers prepared and hosted by our indefatigable officer, a series of typical Scouse (Liverpool) phrases and turn them into Farsi. How does one cope with ‘Dem kecks are dead antwacky’ (Those trousers are very old-fashioned)? Truth is, you don’t – but you have an awful lot of fun and laughter trying!

But the joy and the friendship across our little group cannot hide the fact that these are fellow human beings who are facing yet another arduous journey with lots of potential twists and turns, hazards and dangers. That is the tortuous trek though the asylum process, which may result in them being granted the right to stay in the UK but, sadly, may also end in them being returned to the land – and religious situation – that forced them out in the first place. I am personally ashamed to admit that, until becoming close friends with these brothers, my own appreciation of the situation of asylum seekers was shallow and sadly lacking in both awareness and sympathy. But these men are not faceless, nameless individuals that I might read about or see fleetingly on the television news before turning over to watch something less disturbing of my comfortable life. These are my kin. My family. My brothers. We share the same spiritual DNA.

Yes, we may have come from two very different worlds, but our God has, in His loving wisdom, brought us together and, for me and for many in our little church here in a small corner of England, we will never – and will never want to – be the same again. It is a real privilege to be a part of an organisation both locally and across the world that is working so steadfastly to improve the situation of these men and, sadly, so many others who find themselves in similar straits.

Update: Since writing this piece (in February 2018), our Iranian brothers and sisters have received both good and bad news. All but three have now been granted refugee status, although not without enduring 6 hour interviews and in two cases, initial rejection and the trauma of court appeals where their very faith was questioned. Sadly, the remainder are faced with an ongoing struggle to prove that their cases are genuine.

For me, it isn’t a great leap of imagination to wonder how each of us, particularly as such young believers, might cope if we were the ones being tested. How do you convince necessarily sceptical officials who may have little or no conception – or, worse still, work under severe misconceptions – of what ‘being a Christian’ actually means? How do you explain spiritual experiences to somebody in a different language (via an equally fallible interpreter) when you don’t even fully understand it yourself?

On the positive side, we have been able to show the love of Christ by standing shoulder to shoulder with these believers, surrounding them with a wall of prayers and, on a practical level, producing letters of support and speaking on their behalf in court. But it is far from an easy process. I’m not sure that I would cope with such a stressful experience. ‘Hostile environment’ barely begins to describe it.

But, thankfully, we have a great God who never promised His children an easy ride in this world – but He did promise to be with us every step of the way – every 3616 miles/5820 km of it.

Laurence Sandman is a member of the corps in Ellesmere Port