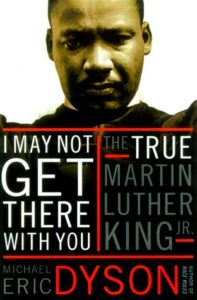 Whilst much has been written about the life and work of Martin Luther King Jr. this is a book that goes beyond autobiography to assess the legacy of King in America today.

From the outset of the book Dyson makes clear his belief that King is “the greatest American who ever lived.”  He then goes on to share three central mistakes people make in relation to King’s legacy; ideas, identity and image.  Rather than a chronological guide to King’s life the book is then divided into these three core areas.

The chapters in the ‘ideas’ part of the book seek to reestablish the radical nature of King, particularly by exploring his changing beliefs in the last years of his life.

“King has been fashioned to calm rather than trouble the waters of social conscience in the post-civil rights era.  But he was no Safe Negro.”

It is fascinating to read about the changing perspectives that caused him to speak out against the horrors of the Vietnam war and organise action against poverty.  In his last years King had, “… a commitment to showing the lethal links between racism, militarism and poverty.”  Martin Luther King is now honored with a national holiday in America so it is easy to forget that in the few years leading up to his death his views on Vietnam, black nationalism and poverty were making him increasingly less popular with whites and also meeting with opposition from within the African American civil rights movement.

The second part of the book deals with identity and chapters in this section directly address King’s plagiarism, the insatiable sexual appetite that led to multiple affairs and his patriarchal chauvinism.  The writer Dyson met with criticism from some within the African American community for criticising King yet he counters that it is essential to connect with the humanity of King otherwise he becomes an unhelpful hero, someone who is so worshipped and adored that he becomes impossible to live up to and then alienating to young African American’s in America today.

Finally, the book deals with how King’s image’s is used today.  I personally found this section of the book less interesting than the others as it moves away from King to cover his family’s wrestle for control over his image after his death.

If you’re looking for an autobiography on the life of King this is not going to be for you.  However, if you know the history of King and want to read more in-depth this is an accessible academic study of his legacy.

As Christian activists it provides much helpful advice through the prism of King’s life.  Most of all it challenges us today as it reminds us of the sacrifice involved in following God by pursuing justice.  For thirteen years King lived in the spotlight of the civil rights movement with the constant fear of death, for King, “His most enduring trophies were the calluses he gathered from marching for justice in merciless heat and the sore knees he gained from bending to pray for enemies he defiantly loved.”

Tom Underwood teaches young people with autism and writes plays about peace. He is currently writing about peace activism and arms trade activists.  He worships at Raynes Park Community Church and tweets @tomcunderwood